Do you have a working fire extinguisher in your residence?

On September 27, 2016 at 09:49 hours, the Swoope Volunteer Fire Company responded to a 9-1-1 dispatch for a 'Vehicle Fire' located in the 400 block of Parkersburg Turnpike, responding units included Engine 14-5 and Response-14.

Augusta County Fire & Rescue Captain Chris Shaver was first on scene and initiated Command. After Swoope units arrived Command was transferred a short time later to Swoope Fire Captain Ryan Folweiler. With a quick response from Swoope team members, crews were able to extinguish the engine compartment fire stopping the damage before it it had a chance to spread to the passenger compartment.

The incident was placed under control by Captain Folweiler and units returned to service without incident. 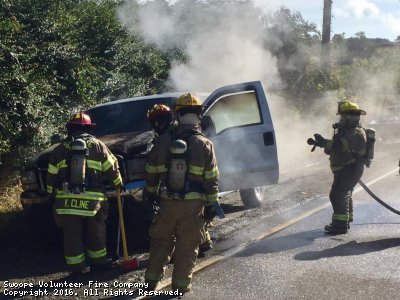 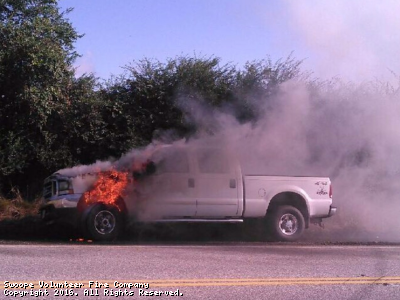 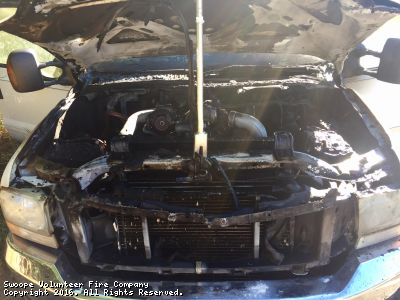 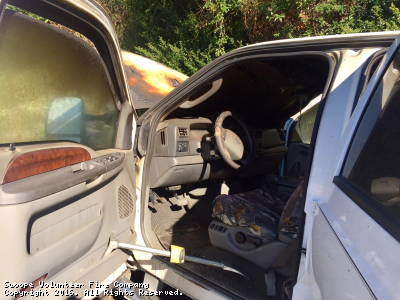 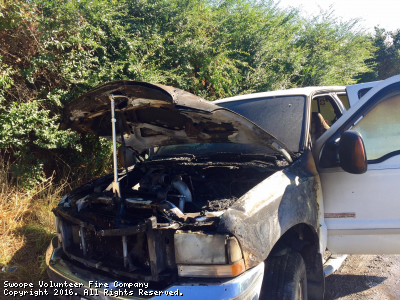 9 entries in the Call History

On December 8, 2016 at 07:05 the Swoope Volunteer Fire Company was dispatched to a structure fire on Elliott Street.  Upon arrival of fire units, Staunton Engine 2 under the Command of Lt Humes advised the dispatch center that a house was "on the ground." Swoope Fire Chief Kevin Wilkes was on scene directly behind Engine 2 along with Swoope Engine 14-5.  Command was transferred to Chief Wilkes. It was learned that this structure had been mostly demolished a few days...

Swoope Volunteer Fire Company along with the Staunton-Augusta Rescue Squad (SARS) were dispatched to a Motor Vehicle Crash on the access road around Beverly Manor Middle School at 10:32 hours on November 17, 2016.Swoope Engine 14-5 arrived on scene first, under the Command of Captain Ryan Folweiler, the crew quickly surveyed the scene while Captain Folweiler initiated Command and directed the crew to attend to patient and stabilize the overturned vehicle. Patient care was transferred t...

On October 6, 2016 at 00:37 hours, the Swoope Volunteer Fire Company was dispatched to assist on a 'working' structure fire at the 200 block of Frontier Road. Engine 14-5 and Rehab-1 both responded from Station 14 For the early morning fire. On the initial dispatch was Augusta County; Engine 10, Duty Officer, EMS-1...Staunton: Engine 1 and Truck 1, and Swoope Engine 14-5. When incident was upgraded to a 'Working Alarm,' Augusta County Rehab-1 (Operated by Swoope Volunte...

The Swoope Volunteer Fire Company sent four representatives to Delaware for the funeral and memorial services for Wilmington Firefighters Lieutenant Chris Leach and Senior Firefighter Jerry Fickes, both who were tragically killed in the Line of Duty on September 24, 2016 while operating inside of a row home on fire.Captain Ryan Folweiler, Sergeant Kendall Cline, Firefighter/EMT Gary Gibson, and Firefighter Courtney LaMay acted as ambassadors from Swoope Volunteer Fire Company as they paid their ...

On September 27, 2016 at 09:49 hours, the Swoope Volunteer Fire Company responded to a 9-1-1 dispatch for a 'Vehicle Fire' located in the 400 block of Parkersburg Turnpike, responding units included Engine 14-5 and Response-14. Augusta County Fire & Rescue Captain Chris Shaver was first on scene and initiated Command. After Swoope units arrived Command was transferred a short time later to Swoope Fire Captain Ryan Folweiler. With a quick response from Sw...

On May 20, 2016 at 12:19 hours, the Swoope Volunteer Fire Company 14 was dispatched to set up a Landing Zone (LZ) at Beverly Manor Middle School for the incoming Petroleum Helicopters International (PHI) Air Care 5 Unit that was inbound from Shenandoah Valley Regional Airport (SHD).Staunton-Augusta Rescue Squad (SARS) and Swoope Volunteer Fire Company (SVFC) were originally dispatched for a traumatic injury for a subject who was struck in the head by a tree limb.  Due to the ...

On May 15, 2016 at 14:08 hours, the Swoope Volunteer Fire Company 14 was dispatched to a Motor Vehicle Collision (MVC) in the 900 block of Cattleman Road. Upon Engine 14-5's arrival, the crew performed a 360 survey and found a two vehicle crash that was blocking the roadway. Lieutenant Cory Smith initiated Command of scene and directed crew to assess multiple people in the vehicles for injuries, and stabilize the scene. One patient was treated and transported to the ...

Swoope Volunteer Fire Company had a busy week in Deerfield, VA. We were dispatched to two working structure fires in three days. The first fire came on Thursday evening. First units marked on location with a construction trailer with smoke showing. Swoope joined crews from Deerfield and Churcvhille to extinguish the fire and check for extensions. The second fire came in on Saturday afternoon and involved a single family dwelling. First crews arrived on location to find a home fully involved with...

Company 14 was dispatched 0505 hrs to the 300 block of Hangers Mill Rd. on the morning of February 16th, 2014. Churchville Volunteer Fire Department, Staunton City Fire Department also responded on the initial dispatch. Engine 47 reported heavy smoke in the area and made it a "Working Incident" (By doing this it adds an additional Engine and a Duty Officer to the incident) and also activated the Tanker Strike Team for that area. With those two requests, Augusta County Fire/Rescue, Vero...

9 entries in the Call History

Copyright © 2006-2021. YourFirstDue Inc. All Rights Reserved. Designated trademarks and brands are the property of their respective owners. Content on this web site is supplied by Swoope Volunteer Fire Company. YourFirstDue Inc. cannot be held responsible or liable for any content, text, pictures, or any other media found on this web site. Maintained by the members and staff of Swoope Volunteer Fire Company.
Management Login
Powered by